I am a proponent of science, as the best method for uncovering facts about the world. In its purest form, science is morally neutral; it’s about finding out how things work. The relative easy in which we live our lives in the developed world is largely due to the scientific effort. In spite of its major contributions to civilization, there can be a dark side to the application of science. The power associated with knowledge and technology makes the miss-use of science a real concern. History has shown us that science has at times been a destructive tool.

The 20th century is perhaps the most devastating and deadly period in human history; more than 100 million people have died in wars and conflicts. The scale of human suffering is unfathomable. Clearly, the blame lies in human beings and the propensity to inflict violence on their own kind. Human history is a tale marked by wars, and the borders of the world map have mostly been drawn by conflicts. The role of science in 20th century warfare is difficult to quantify; however, the invention of weapons of mass destruction made the devastation much worse.

Modern science has giving men unprecedented power; that power was unleashed for good and ill. The two world wars immediately come to mind as a turning point in human history. Never before had conflict reached such a scale. The First World War was a major cause for the Second World War that followed, as it set the stage for Nazi Germany. Perhaps both wars could have been avoided had the world leaders realized the horrific potential of their new weaponry. By the early 20th century the potential to do harm had never been greater.

Growing Up Too Fast

Scientific discoveries came about so fast (in comparison to the evolution of civilizations) that the world had not yet developed the foresight to predict its consequences. Was humankind equipped to responsibly handle such power? Perhaps we were a little naive at the turn of the 20th century. People were asking: How could science make life better. The idea that science could lead to unintended and destructive consequences was probably an after-thought.

Some notable examples of science gone astray are:

On the flip side, understanding the fundamental nature of the atom has led to modern information technology. This is one of the best examples of how difficult, or perhaps impossible, it is to predict how a scientific discovery will affect the future. It starts with uncovering how nature behaves under certain conditions; usually it gets expanded on by other scientists. The applications of technologies and industries follow, and that is where the dark side of science can creep in.

Has the power and speed of introducing technologies outpaced our predictive and ethical judgement? Looking back at the last century, like a child forced to grow up too fast, humankind has not always used good judgement. In some ways, it is paradoxical that in our haste to improve life both positive and negative results ensued. Today, having learned from history, there is more awareness of the potential downside of scientific applications. And that’s a good thing. A benefit in one area could trigger a negative effect in a non-target area. And short-term gains have to be balanced with considerations for longer term risks. 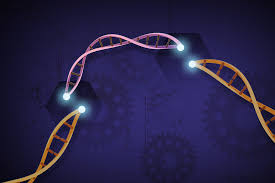 In terms of science and ethics, genetic engineering is a modern-day example of the complex questions that can arise with new discoveries. Today, with the hindsight of history, a cautious approach is usually the norm with cutting edge science. Just because we can do something it doesn’t mean we should, but it also doesn’t mean we shouldn’t. For instance, a new genetic editing technology developed in 2012, called CRISPR, is showing great promise of essentially cutting and pasting DNA. CRISPR can cut and remove a sequence of DNA, or cut and replace a sequence of DNA. However, it is too early to tell if the process will be a smooth as it appears. There may be unpredictable complications ahead.

New advancements in genetics introduce a number of ethical questions: one type allows for eliminating or editing undesirable genes, such as a gene responsible for a deadly disease. Another type is genome enhancement; this would be identifying desirable traits, such as intelligence or physical strength and engineering those traits at the genetic level. Of the two ethical questions, genome enhancement seems more ethically murky. The attempt to alleviate pain and suffering is a noble cause, while improving a species by a subjective rating system is another matter. There is also the value of diversity in a gene pool to consider (a natural protection against any unforeseen threat).

Another important distinction is the difference between somatic gene editing and germline gene editing. Somatic cells are most of the cells in the body, like skin and blood cells. Somatic edits do not get passed on to offspring. Germline edits involve sperm, egg or embryos. With germline editing, changes made to DNA are passed on to offspring, thus affecting future generations. There is a major difference between the two.

Genetic engineering could improve health and well-being; however, it could become subjective or lead to unintended consequences. Who should perform genetic alterations, and when would it be an acceptable practice? Some people believe we should take a cautious approach and suspend the use of some technologies until we know more. While others think we should embrace the new technologies.

We are still in the early stages of genetic technology, however, I can foresee a day when genome sequencing will be part of a normal heath plan. A person would carry their genome with them in the form of an identification card (a more personal social insurance number). A doctor’s appointment would begin with the question: “Can I see your genome?” This hypothetical scenario may be good for some, but for others, the knowledge that they are susceptible to die of a heart attack at age 50 is undesirable. I suppose it would be a good thing if measures could be taken to avoid a potential problem. However, if your future is read through your genome and it says you are prone to be inflicted with an incurable disease, it would be comparable to a death sentence.

The Genie is Out of the Bottle

There is no going back and pretending that we should not interfere with nature. We are already too far implicated. In response to the often used phrase, ‘We shouldn’t play God’, co-discoverer of the DNA structure James Watson replied: “If we don’t play God, who will.” Beyond finding solutions for problems we have already created, we also have to determine when to hold back or when to implement existing knowledge. My hope is that history has been a valuable teacher, and that humans will view progress with a more skeptical eye.

Scientific thinking is trending towards holistic concepts. We know too much to arbitrarily divide the world into neat little models. Everything affects everything else, or at least everything affects something else. Our awareness of this simple fact makes implementing new technology more complicated. Adverse side effects could come in ways that are totally unpredictable. The assertion: ‘What could possibly go wrong,’ sounds a little over-confident.

Knowledge is powerful but preferable to ignorance. Scientific knowledge can be viewed in the same light. Humans have not always used science in a positive way, but that does not point to an inherent flaw in the scientific process. All knowledge is ethically neutral, and only when it is applied can ethical questions arise. To continuously grow our knowledge base is a worthwhile endeavor, as the pros far outweigh the cons. Ever since the scientific revolution, we (in the developed world) have enjoyed progressively better lives. Nevertheless, with knowledge there is power, and with power lies responsibility.

One response to “Science and Ethics”