Apollo 13: From Failure to Triumph

On April 11, 1970, the Apollo 13 Saturn V rocket escaped from Earth’s gravity and headed towards the moon. The astronauts on board were Jim Lovell, Jack Swigert and Fred Haise. Of the three, Lovell was the only one who had previously gone to the moon (on Apollo 8). However, that mission’s objective was to orbit the moon only. For Lovell and Haise Apollo 13 presented the opportunity of a life time; they would get the chance to walk on the moon, so they thought.

Leading up to the mission Apollo 13 lacked the media attention given to the first two moon landings (Apollo 11 and 12). Understandably the first landing made history, and the second landing might have given the public the false impression that it was becoming routine. In the end Apollo 13 became perhaps the most dramatic and famous of all the Apollo missions.

“Houston we’ve had a Problem Here”

On the evening of April 13 the spaceship was 200,000 miles away from Earth when everything changed for Apollo 13. On what was considered to be a routine procedure, Swigert flipped the switch to initiate a cryo stir. The stir would fan and heat the super cold oxygen and prevent it from settling into layers inside a tank located in the Service Module. The Service Module was attached below the Command Module and contained the oxygen tanks and the main engine of the spaceship. Moments later the crew was startled by an explosion. Alarm lights lit up and Swigert uttered his now famous words “Houston, we’ve had a problem here.”

It wasn’t long before Mission Control realized that Apollo 13 would not be landing on the Moon. The objective had suddenly changed into a rescue mission. After the explosion Lovell looked outside through a window and noticed a gas escaping from the spacecraft. It was determined that the gas was oxygen. The implication of the loss of oxygen was significant. The Command Module (Odyssey) had now lost its normal supply of electricity, light and water. With the Command Module now compromised, the crew needed to find a way to preserve it for re-entry.

It was determined that the Command Module needed to be temporally shutdown and later re-powered for re-entry. This part of the spacecraft had to remain viable because it contained the heat shield. In the meantime all three astronauts would have to jam inside the Lunar Module (Aquarius), which was designed for a two-man moon landing. Mission Control was faced with procedures that had never been done before. They had to solve problems on the ground by writing procedures down and then testing them on the simulator before instructing the crew. There was no time to waste, so Haise and Lovell powered-up the Lunar Module while Swigert shut down the Command Module. 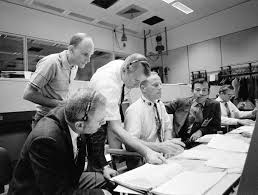 To facilitate the return trip Mission Control decided to use the moon’s gravity and slingshot around. The spaceship’s course had to be altered from a landing trajectory to a loop around the moon. Two initial burns were performed, one 35 second burn as they approached the moon; then a longer 5 minute speed-up burn two hours after going around the dark side of the moon. A third burn would later be required to adjust the spacecraft’s trajectory before re-entry. All this had to be done with the Lunar Module even thought it was not designed for these maneuvers. However, out of necessity, Mission Control and the crew made it work.

The Lunar Module had to be preserved for an additional two days longer than it was designed for. Every nonessential system was turned off to conserve energy. This was necessary, however, it meant that the crew would have an unpleasant return trip. Temperatures dropped to near freezing, water was rationed and some food became inedible; the crew became hungry and dehydrated. For the next few days they got little sleep and Haise developed a kidney infection.

Despite the discomfort inside the Lunar Module it had done its job; now it was time to power-up the Command Module for the last leg of the journey. No one knew for sure how this would go. The Command Module had never been left in the deep freeze of outer space and then re-powered. Mission Control relayed the instructions and the crew wrote down the steps. This was no simple task, because there were over 500 steps to follow to the letter. Fortunately the Command Module came back to life.

A few hours before re-entry the Service Module was jettisoned and for the first time the crew was able to see the damage from the explosion. A whole panel had been blown off. One Oxygen tank had been completely destroyed and another one damaged. A NASA investigation later revealed that a spark from an exposed wire inside an oxygen tank caused the fire.

The Lunar Module was then let go and all that remained was the Command Module. There was a concern that the heat shield may have suffered some damage in the explosion. Nevertheless, at this point there was nothing that could be done about it. Re-entry was imminent; everyone held their breath and hoped that the heat shield would hold up. Normally a loss of communication of about four minutes is expected as the spacecraft enters the earth’s atmosphere; however in this case it took an additional 1 minute and 27 seconds before communication was restored.

When word was finally received from the crew, Mission Control erupted in celebration. On April 17 the Command Module splashed down in the Pacific  Ocean; at last they were home. Although Apollo 13 did not achieve what it initially set out to do, it did test Mission Control and three astronauts to their limit. Ironically, what could be viewed as a failed mission, turned out to be arguably Apollo’s finest hour.